I love Warsaw trams. The old, boxy ones, where nothing is powered, except for the tram itself. The heavy sliding doors have to be opened by hand, so most of the time they remain ajar, with boys and young men jumping in and out while the tram is in motion. That way you never have to pay for your ticket. During rush hour people stand on the steps of the trams, hanging onto handrails or each other, sometimes two or three layers deep, so that the trams resemble bread baking pans with the rising dough spilling out. 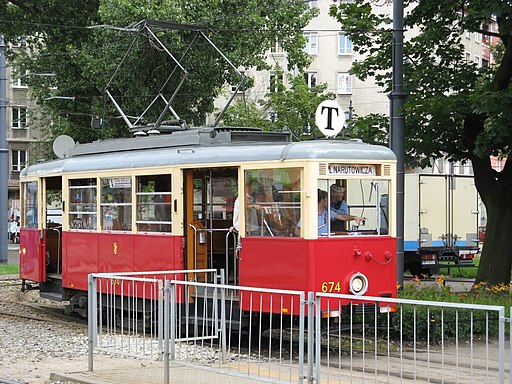 My favorite spot is right behind the tram operator, himself standing at a wooden console with nothing but a huge brass crank. I watch him turn the crank left and right, each turn producing a series of metallic clicks, like a gigantic watch being wound up. I have no idea what the crank does, but it must be important, because there is a barrier separating the operator from the passengers, so that he always has enough room to operate, no matter how crowded the tram gets.

The tram features in my dreams. A recurring nightmare has me riding the tram stark naked, trying to act as if this was the most natural thing in the world. All the passengers are staring at me while I can't wait to go home, put some clothes on.

My maternal grandmother lives only a few blocks away - no need to waste money on a tram ticket, but I'm too young to walk there alone, so I don't go there often. Only a few blocks and it is a different world. The street is cobblestone, not asphalt. There are fewer cars and no trams. The house looks different, smaller. Wooden staircase, no elevator.  There is a guy playing harmonica next to grocery store.  He has no arms or legs - just a torso with head. The torso sits on a wooden wagon, like those used to sell vegetables at a market. Out of his military issue jacket come two wires to which a harmonica is affixed, so that he can reach it with his lips. I'm scared of him.

The third floor apartment has two rooms, one with a small balcony, and a fairly large kitchen. Altogether perhaps 500 square feet. The house has no central heating or gas, so a large, white-tiled stove sits between the two rooms. There is a coal burning oven in the kitchen as well. Once a year a large lorry stops in front of the house. It is pulled by a strong, dirty horse. Sometimes there is a mountain of coal on that lorry, and I wonder how is that possible that a single horse can pull that much coal. Two very dirty men, faces blackened by coal dust, carry large wicker baskets full of coal down a narrow staircase into the cellar. Some chunks of coal are as large as a human head. My grandmother gets upset when there are a lot of those large chunks, because she has to break them with a hammer. She also gets upset when there is too much useless coal dust in those baskets. "You have to watch them like a hawk", she says, pointing toward the lorry.

In winter she will carry the coal in metal buckets, up to the third floor. It's more like a fourth floor, if you consider that it comes from the cellar. Getting the fire going is a multi-step process with several points of possible failure. You start with crumpled newspaper and a few pieces of kindling. You set that on fire and a short while later you check whether the wood is ablaze. If it is, you add a few chunks of coal and leave the cast iron door open just a crack. You wait and then add more coal. When all of the coal is aglow you close the door completely, so that it will burn slowly, releasing heat. The tiles can get so hot you can't touch them, and a couple of hours later the whole apartment is toasty warm.

There are four people living in that apartment: my grandparents and their younger daughter - my aunt Ala - with her husband Witek, and later their son. They occupy the smaller of the two rooms, but when their son is born, they will swap the rooms with the grandparents, and will stay in that larger room until their divorce a few years later. My sister and I come for some weekends throughout the year, and for holidays. It is a one hour trip by tram, because we're now living in our own apartment on the other side of Warsaw.

The building where my grandmother lives was erected before World War II to house laborers with families. It was cheaply built, with plaster-covered straw serving as insulation. Thankfully, it has plumbing, but not enough to provide a toilet for every apartment, so some apartments have to use communal toilets. We are lucky: our grandparents have their own water closet. There are no bathrooms in the house - all ablutions and small laundry are done in the kitchen; there is a communal laundry room in the basement for washing linens.

There is housing shortage in Warsaw, so people tend to stay in the same apartment their entire lives - sometimes two or three generations. You get to know your neighbors pretty well - that's why most of the neighbors in my grandparents' house are called "aunt so-and-so" and "uncle so-and-so". They have survived the war together, including one large German bomb at the beginning. The bomb, having gone through the roof and three floors, wedged itself right above the cellar, but did not explode.